In our SPIBPro’s Q3’19 update, we added some new enhancements regarding buffer overclocking handling. While the technical details of these capabilities are reserved only for our customers, the general problem statements and solutions are, nevertheless, worth sharing. This short post will cover this buffer overclocking topic and also serve as a future reference for our customers.

Some of the pictures used here are from previous IBIS summit’s presentations. User may find references to these slides toward the end of this post.

What is buffer overclocking: 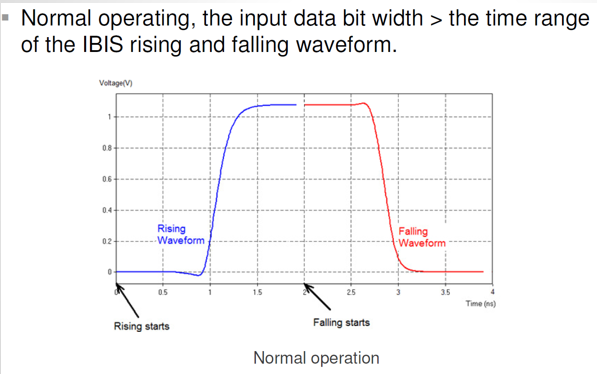 This “shortest” possible time span. thus dictates the highest possible operating frequency. When an input stimulus exceeds this frequency, then this buffer is being overclocked. An overclocked buffer will not have sufficient time to complete either rising, falling or both transitions. As a results, before it’s pad can reach steady state (indicated by the green curve below), it has to make transition toward the other direction again. The outcome of this situation is that there may be discontinuities, glitches or non-convergence during the simulation.

IBIS spec. doesn’t spell out how a simulator should handle in this case. As a result, an overclocked buffer may behave differently across different EDA tools. That’s why in the IBIS cookbook, it’s suggested that a model maker should generate short enough VT duration table so that the buffer can operate fast enough to avoid being overclocked by end user during normal usage. For example, if a USB3 buffer has total VT duration longer than 200ps, then it will definitely be overclocked when user use a normal 5G bps PRBS signal to drive this buffer.

Why buffer overclocking is more problematic in a power-aware model:

To make a buffer’s VT table duration shorter, a common approach is to remove the steady state (flat portion) of the leading and trailing waveform. However, when a power-aware model is being considered, this will present some problems: 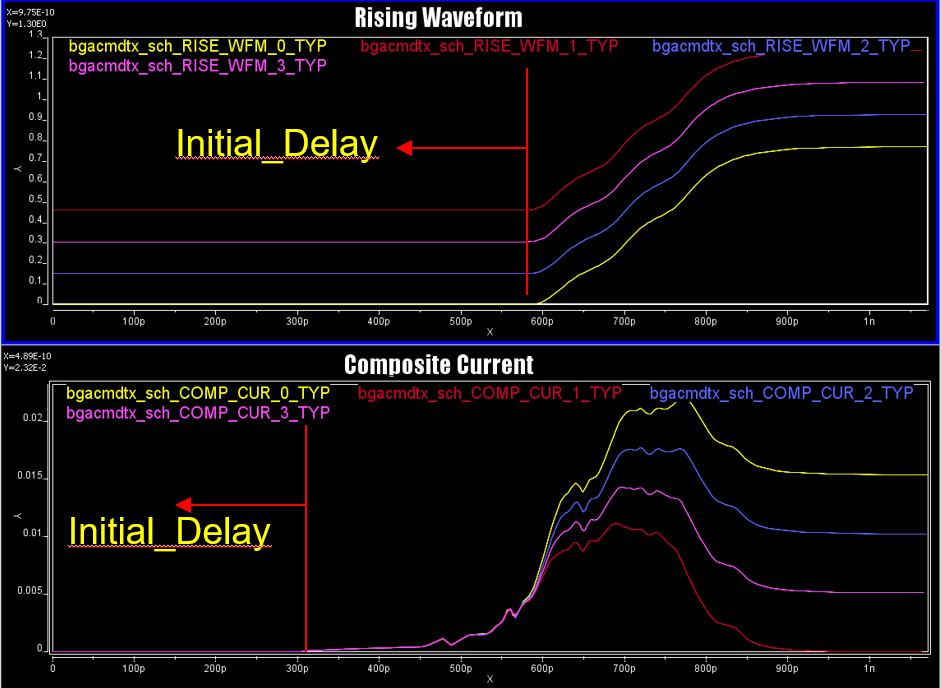 The picture above shows both the VT data (rising only here) and IT together. IT is the composite current for DDR DQ-like power-aware model. Since the extracted data of the current portion has pre-driver into account, it’s often the case that there will be “activities” (i.e., non-zero current) long before the voltage at pad starts transition. As a result, the amount of leading steady state can be removed in a power-aware model are often bounded by the IT table. And this limitation is usually very “severe” such that the resulting trimmed model still can’t meet the spec.-required operating frequency. 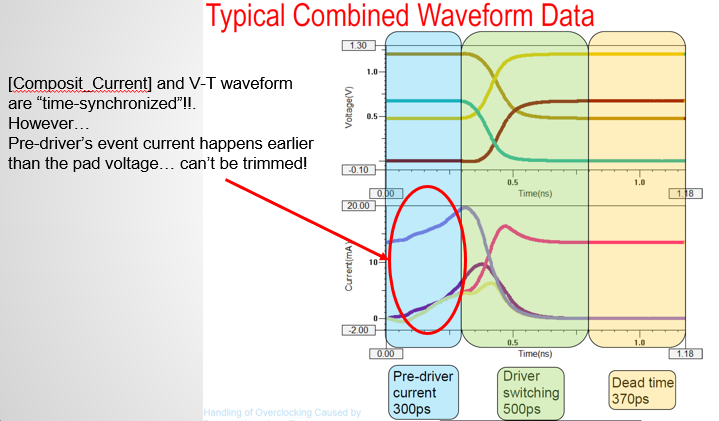 This picture above (from a summit paper) high-light this issue more clearly. It’s also worth mentioning that the “T” of VT and IT table are time synchronized. So one can’t treat these two table separately or shift x-axis time point at will.

Solution to the overclocking issue:

There are several approaches to address this overclocking issue:

The first approach is not only time consuming, but will also easily lead to usage error or non-convergence. The second one may or may not produce desired results. It’s certainly simulator dependent and a model maker/user may not have any control. Nevertheless, the third approach is the preferred one as only the model maker knows how the buffer behaves and exact amount of delay to be removed.

One common mistake of trimming data to avoid overclocking is that different VT tables or IT tables are processed individually. For example, if VT table simulated from one of the fixtures has longer delays than the others, a model maker may tends to remove different amount of delays from different VT tables. Even more severe problem happens when VT and IT are removed independently. All these handling are erroneous due to the following reasons:

To summarize, a model maker needs to trim ALL time-dependent table data together with same amount. While trimming trailing time point are relatively easy (just remove those points will do). Trimming from the waveform’s beginning also requires shifting x-axis points to start from t=0. So this is usually better be done with a modeling tool or flow.

Handling of the overclocking:

Due to the limitation of the pre-driver current showing activities much earlier than the pad’s voltage transitions, a simulator can’t do much if both are bundled together in a device model in a simulator. However, if the IT table can be pulled-out from the IBIS device simulation model and be handled as a time-dependent current source, then things will be much easier. That’s why in the IBIS V6.1, two new keywords are introduced for this purpose. They are V-T and I-T for [Initial Delay]:

Before using these keyword, one should carefully read the related BIRD document (referenced at the end) and the associated section in the IBIS spec.: 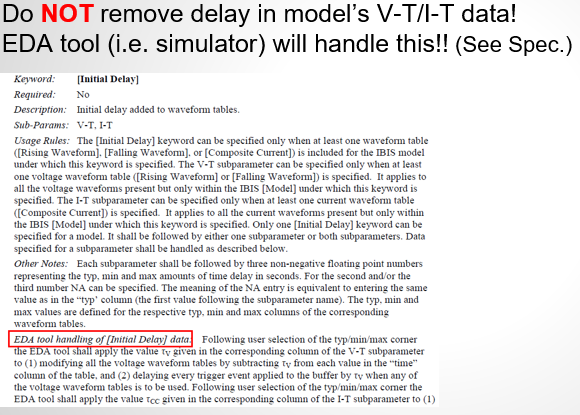 For example, it is the simulator’s responsibilities to remove these specified delay from the “raw” model data before simulation. So a model maker should NOT remove the delay themselves…. simply specify the delay values will do.

That is to say, the modeling process may become two “passes”. At first, once the un-trimmed model data are produced, a maker can use an inspection tool (such as our SPIBPro’s built-in specter) to plot all VTs tables together and measure the common minimal delay to remove. Do the same to all IT table as well.

In the second “pass”, one or both of these two different values are specified under the [Initial Delay] keyword to complete the modeling process.

For a power-aware model which has IT data, the solution using [Initial Keyword] is the best one. For a traditional, or only voltage related, buffer, a model maker has more choices. 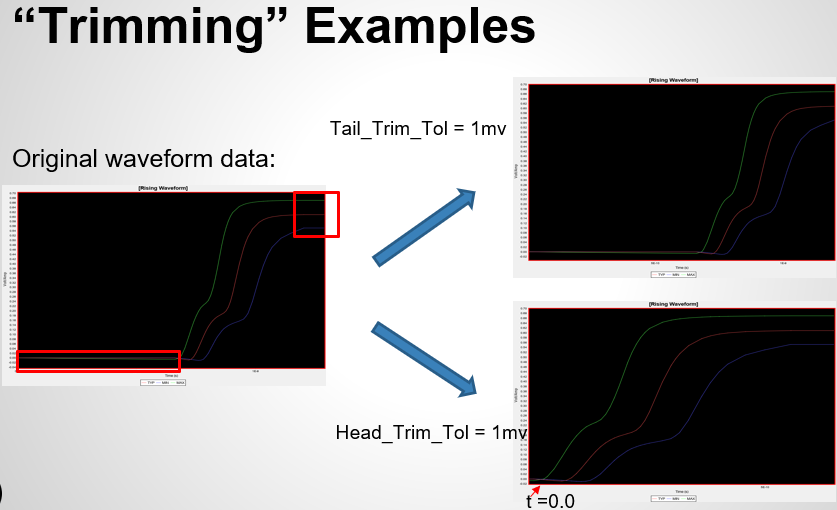 For example, a model maker can start by trimming the trailing steady data. Increment the trimming value or also trim the leading portion until the frequency meets the demands.

This method will alleviate the restrictions of simulator’s support for the [Initial Delay] support… thus an older version of simulator will also work. At the meantime, a caveat worth noting is that the distortion of the model data depends on the amount of data being removed:

So if excessive amount of data is removed, the resulting model may not pass ibis checker (will give DC mismatch violation). In this case, further tuning is needed. Our SPIBPro does perform “AutoTune” automatically during trimming process so a trimmed buffer will almost always error/warning free.

The overclocking issue has long been there since early 2000. I remember one of the projects at my earlier career was to address the non-convergence issue in Mentor’s simulator brought by user trimmed model. Interested user may find the following reference useful and worth reading:

Recently I gave a training to some of our customers regarding package model handling in an IBIS file/model. Most of the treatments in this topic fall within IBIS spec., extraction and simulator tools used, rather than modeling tool like our modeling suite or SPIBPro. Thus I think it will be beneficial to organize the materials and share through this blog post, while serving as a future reference for our customers.

An IBIS file may contain one or more IBIS models. Each of the IBIS models has its own IT or VT tables to describe the behavior of the Tx or Rx silicon design attached to that signal pin. The effect of the package model, on the other hand, is not included in those table data. Information about the package model is “linked” with the silicon portion of the buffer through either IBIS keywords within the same IBIS file, or as a separated file in different formats. It’s the simulator’s job to take both the separated Tx/Rx silicon behavior, as well as package model into account during circuit simulation.

In general, there are two ways to link the IBIS’s silicon behavior with the package model. Each also have two possible routes to achieve the same purpose:

More details will be discussed below… Please note that these package models should be generated from extraction tool such as HFSS, Q3d etc. The IBIS model or file mentioned here simply serves as a place holder. Circuit simulator will use all these data together during simulation.

Package as a lumped model inside an IBIS model:

From the IBIS spec, we can see two related keywords for this lumped model representations: [Package] and  [Pin] 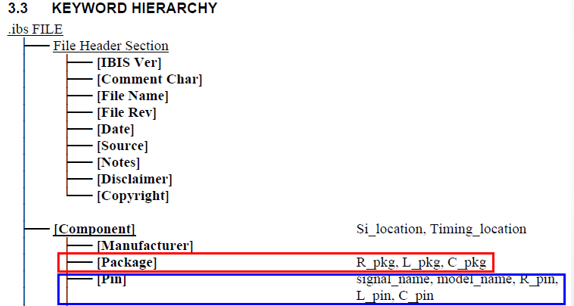 To be more specific, please see this example model:

These values represent the parasitic structures as shown below: 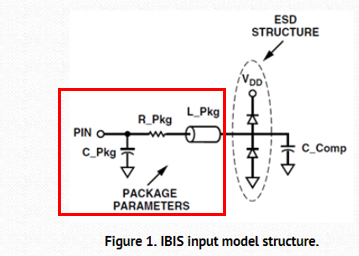 This is the simplest, yet least accurate, method to describe the package information. While the [Package] keyword and data is required, parasitic portion of the [Pin] keyword is optional. When both are present, those in the [Pin] section will superseded (i.e. override) values defined in the [Package] section. Thus, a model maker can use [Pin] keyword to introduce pin specific lumped parasitics while using [Package] keyword for general or default values.

Package as a distributed model inside an IBIS file:

A more comprehensive (distributed) package model may be introduced into an IBIS file and model using the [Package Model] and [Defined Package Model] keywords: 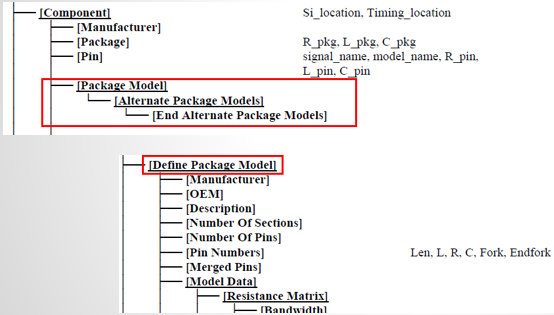 Using this method, the component declares the name of a package model it is using (thus the value of the [Package Model] is simply a model name string), and the detailed contents of this package model is defined as a separated section using top-level keyword, [Define Package Model] inside the same IBIS file (usually toward the end of the file, after all [Component] descriptions): 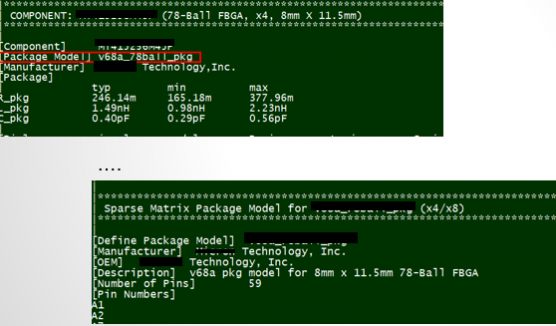 What’s in side the defined package model? Since it’s a “distributed” model and belongs to a component, terminals mapped to a component’s pins are there and so are frequency dependent R/L/G/C matrices etc. The dimension of the matrices is equivalent to the number of pins mapped. With that said, a S-parameter format is not supported here. To use a S-parameter as a package model, one must use either of the remaining two methods to be described below.

As mentioned earlier, an IBIS file or an IBIS model which has package model info. is just serving as a place holder. Package model’s effects or behaviors are not included in an IBIS model’s IV/VT/IT table data. Simulator has the responsibility to combine these two together… either when computing switching coefficients for lumped model version or “stamping” extra elements into nodal matrices for a distributed one. This also means that different EDA tool may have different methods, syntax or GUIs to introduce package model’s data:

Use ICM as a separated file for package model outside an IBIS file:

The ICM (IBIS interconnect modeling) spec. is a separated “top-level” spec. document similar to an IBIS spec. So to learn more about it, one has to read the through ICM spec. document

While it’s more or less similar to the [Defined Package Model] mentioned earlier in terms of R/L/G/C frequency dependent matrices etc, it has one unique strength in particular that it supports S-parameter: 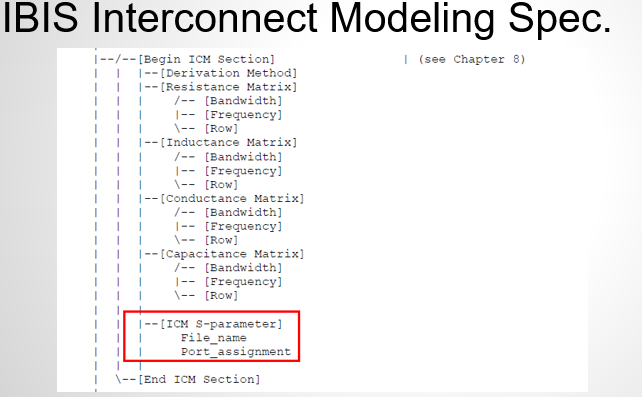 So if your extraction tool can only produce S-paramter format, then ICM is the way to go. The table below lists the comparison of different interconnect model format: (PKG is the defined package model) 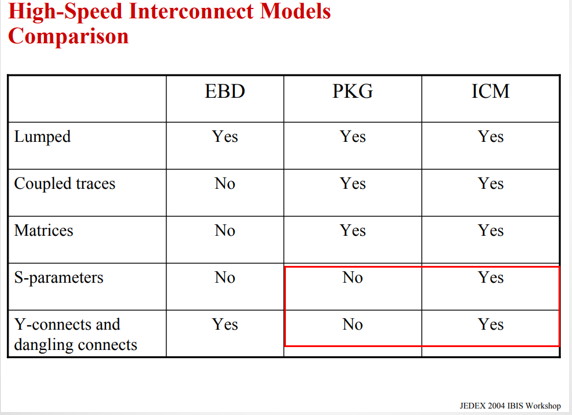 Use general circuit description for package model outside an IBIS file:

Last but not least… one may also introduce package model contents using a non IBIS/ICM specific format. For example, a model maker may provide a spice .subckt representing the package model (converted from frequency data using tool like broadband Spice or IDEM work etc, can have further hierarchy) or a simple S-parameter. The connectivity should be documented in the simulation guide or usage manual of the IBIS model. It’s the end user’s responsibility to put this as one of the stages in simulation topology. For example, Intel’s platform design guide use such method for an ICH package model: 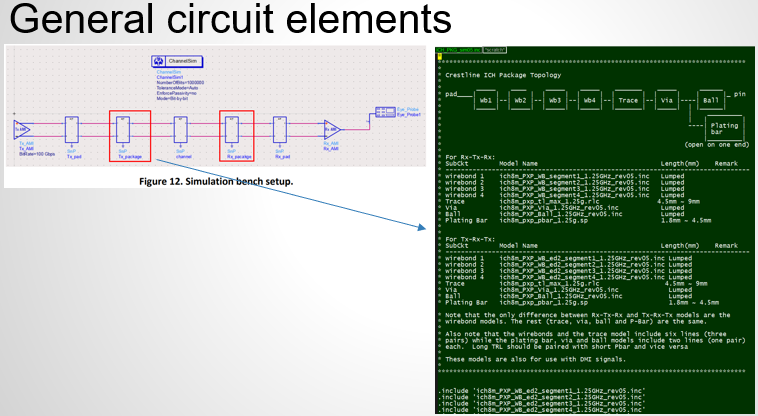 There are pros and cons for this approach: a model user may have more work to have package effects introduced. On the other hand, this method has best compatibility… it does not require supports of a specific IBIS/ICM version in the simulator used, and it also allows probing or sweeping internals inside the package model for debugging or optimization purpose.