Interested reader of this post may also want to follow up with the [Part 2] of same topic and try out the [Free Web App] which realizes this conversion flow.

Most of the buffer modeling flows focus on creating IBIS models from existing transistor buffer design, usually in spice format. However, we also find values in  flow of doing the other way around, namely converting IBIS model to spice format. This is motivated by one or more of the following reasons:

There is already a vendor providing Ibis2Spice in their tool. Their free version supports only up to V2.1 IBIS model and the paid version only up to V3.2 IBIS model. Having that said, the model converted by their tool can’t be simulated in free spice directly. The flow we have developed can supports up to V5.1 model which includes the current information like [ISSO] and [Composite Current] keywords. In these two posts, we will explain about our flow in details. We will first review how ramp rate data can be used in free spice, followed by how waveform data can be converted into spice, accompanied with correlation data in both cases.

In this first post, we will review the existing Ibis2Spice flow. We have also re-implemented this IBIS to Spice flow and release it free in our SPILite module. Output from our flow is directly usable in free NgSpice, which is also included in our tool. Basically, it uses ramp rate data only in the given IBIS model and creates a corresponding spice model. The learning here is how behavior source, ASRC (Arbitrary SouRCe) can be used to implement the IV table lookup. This technique will be applied more extensively in waveform based Ibis to spice flow (next post).

Searching from the web will bring you to this post (for original author’s credit): IBIS to Spice Translation (part 1). In this post, author describes the operation, his attempt to modified circuit and the result. He also provided an Awk script to accommodate the the changes needs to be made in order to run on free spice. As this post is written more than twelve years ago, part of the content has been outdated. For example, the NgSpice 26 does accept the syntax like  X + -3.12 so there is no need to convert to X-3.12 any more.

The part 2 of the original post show the schematic of the converted ramp-based spice circuit. It is hard to find on the web, so we post it below to save reader’s effort:

The key elements here are four IV curve data: XPWRCLAMP, XGNDCLAMP, XPULLUP and XPULLDOWN. These four IV tables from original IBIS have been realized with ASRC sources, as explained in NgSpice manual:

The power clamp and ground clamp branches are always on, so the data is used directly. Their ASRC data is a converted PWL curve shown below. Depending on terminal voltage V(1, 2), current will be output or drawn from terminal 3 and 4.

For pull up  (PU) and pull down branches (PD), they are turned on/off only after buffer has switched, the rate of turning on/off is based on a RC constant (C1 and RB3 in the upper left of the schematic) converted from ramp rate value in the model. This RC value is then used to multiply the PU/PD voltage and finally converted to a current source using G element (VCCS, Voltage Controlled Current Source).

In the original post, author mentioned he has attempted to replace this RC based implementation with his PWL version yet get non-smooth results. We think this is because PU/PD branches are turned-on/off gradually. Only when they are left for certain period of time, static state will be reached. Thus a “time” based parameter must be present. Otherwise, static solution is solved at each time step and thus result will be incorrect. RC multiplier realizes this transition of “gradually” turning on/off the PU/PD branches.

With the RC based implementation, one can mimic the “ramp” data used in other IBIS capable simulator and produce good correlation, as shown below. Due to the simplicity of this implementation, the simulation speed is very fast. 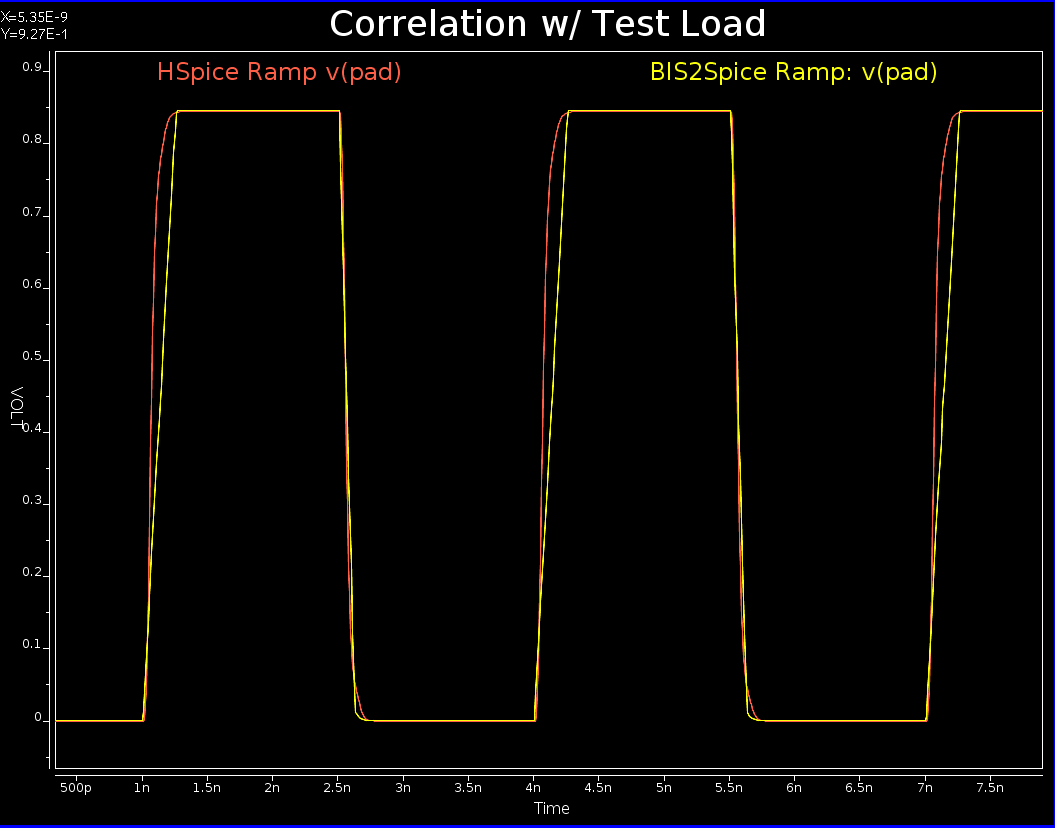 Note that with this implementation, drawing current from VCC/VSS are way off. This is also indicated in the original post. As a result, this approach will not be useful for SSN simulation which includes PDN noise. Further more, it will not capture initial undershoot, final overshoot and other more subtle waveform presented in real buffer switching, also the RC curve (shown in the red above) is not true “linear”. In additional to the ASRC based implementation for IV tables explained above, part of the converted circuit is used to detect and convert input analog signal into digital ones. Lastly, each corner of the model to be used in the simulation needs to have a spice subckt library converted from corresponding corner in original IBIS model.