Interested reader of this post may also want to follow up with the [Part 1] of same topic and try out the [Free Web App] which realizes this conversion flow.

For the motivation behind our Ibis to spice development and Ramp based Ibis2Spice conversion flow, please see [previous post]

Typical IBIS model simulation makes use of its waveform data. Thus a converted spice model from its IBIS model must be able to use these timing related data to have good correlations .

Both voltage and current related data can be timing related: In IBIS model of version 3.2 and up, one ore more “rising” and “falling” waveform may be included. Typically, two set of waveform under two different loading condition will be provided. In case only one waveform is available, simulator may convert ramp data to form additional set of waveform. In IBIS model version 5.1 and up, “composite current” is also included in order to account for simultaneous switching noise. This current information is point-to-point aligned with their voltage counterpart to withdraw current from power supply terminals of the buffer model. Note that what we call “timing” here is actually “elapsed time” after buffer’s input signal switches from low to high or high to low. Two sets of switching coefficients, Ku/Kd for rise and fall transition respectively, are used to mimic the gradually turning on/off the PU/PD branches such that under test load condition, the voltage and current waveform data can be reproduced accurately. By using these swtching coefficients, buffer’s strength will be scaled accordingly depending on the load. User may see [our past s post] for buffer’s operation in more details.

Once we have the related  info. then we can create building blocks and assembled exactly as  they are meant to be used in IBIS model, but now in spice format. So the schematic of our waveform based converted spice model will look exactly like a “stock” IBIS:

To achieve this, i.e. be able to use timing data in converted spice model and run like a stock IBIS, three main challenges need to be overcome:

In free spice (e.g. NgSpice)’s ASRC (Arbitrary SouRCe) element, function can be used.  One function parameter which may be used for this timing purpose is the “time” variable:

By using this “time” variable, we can calculate and extract the “elapsed time” info.:

With the elapsed time, t, now available, we can compute Ku(t)/Kd(t). There are numerous paper and presentation detailing the algorithms. For example, one may compute this switching coefficients from model data based on the first reference below, or use measured based approach based on spice simulation detailed in second reference:

In general, waveform data from two different test loads are used to solve two unknowns at each time points during rising/falling transition. This calculation is done offline in advance and the resulting data are again realized in the form of ASRC devices. The PU/PD/PC/GC branches will be exactly PWL based ASRC, only that the PU/PD takes one more input (NKUX, NKDX below) which is the switching coefficients, Ku(t) and Kd(t):

Ku/Kd are ASRC with pre-computed coefficients and variable of “elapsed time” computed from the first step:

PU/PD branches draw associated  current based on the Ku/Kd value presented as voltage value at node 5 below:

Assembled the block together in spice formats:

While netlisting different PU/PD/PC/GC/Ku/Kd blocks together is trivial, a nuance becomes apparent during validation: the assembled spice model will have “spikes” right before and after each transitions which makes the model unusable.

Further investigation reveals how devil is hiding in such details… As explained in our previous post, there is a “hand-off” during transitions: 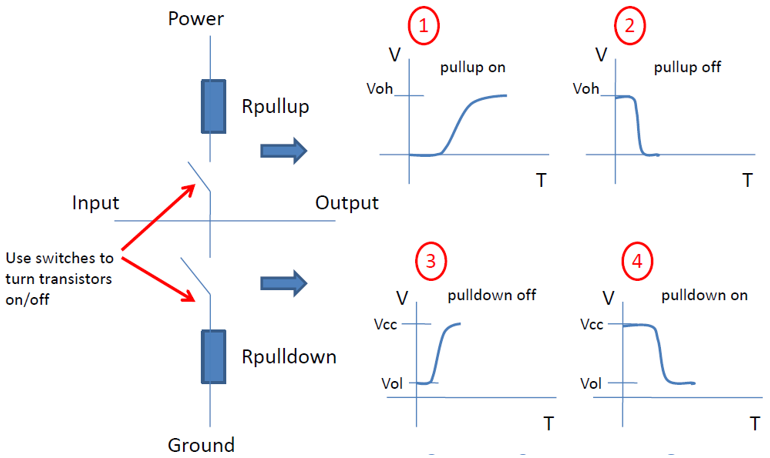 That is, when we “run out of” Ku/Kd for, say rising transition, we keep using the last point data until buffer is about to switch from high to low state. At that point, “hand-off” happens so that Ku/Kd for falling transition will be used. The “hand-off” process is triggered from input and even a time step delay in terms of table usage switching will cause huge spike and cause problem. With carefully looking into different signals in details and figure out their relation in timing, we have a solution which filters out all the spikes and produce a well correlated results, as shown below: 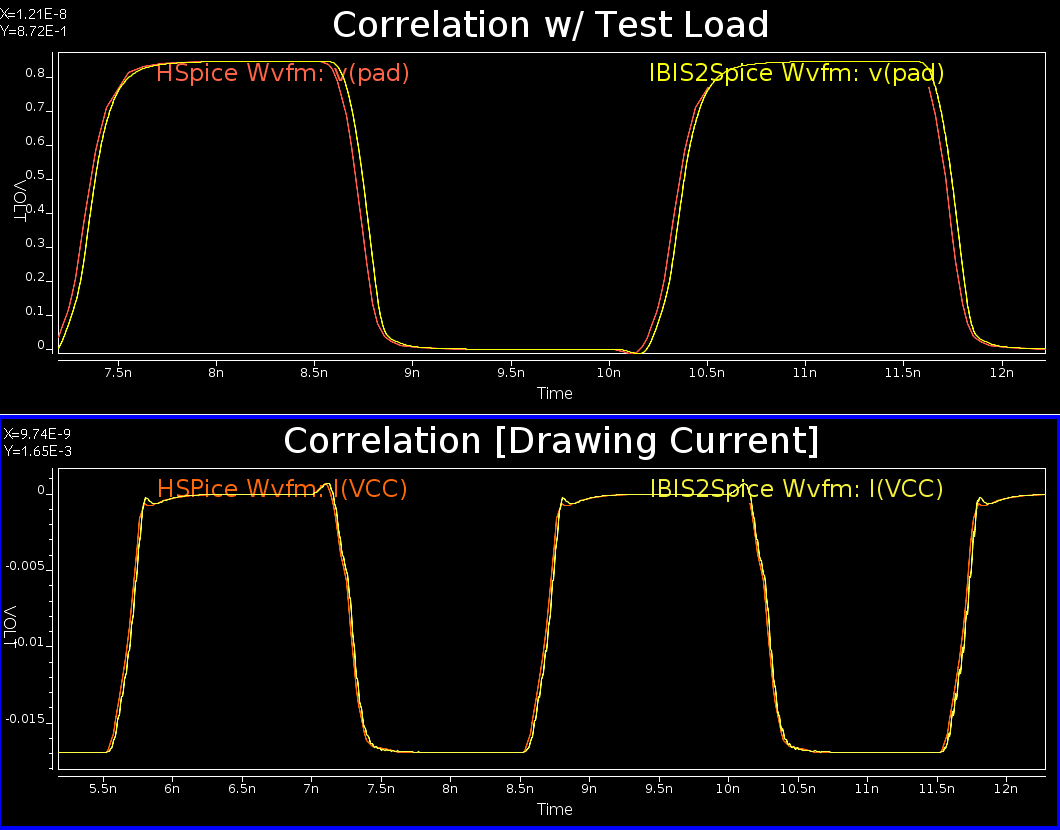 Both the voltage waveform and drawing current matches quite well. The small delay is insignificant because it’s a constant added to each cycle and will be eliminated in the eye plot.

As we introduce two single time step delay transmission line elements to calculate dv/dt and serve as sample-and-hold functions, they also limit the simulation time step a simulator can take. As a result, the converted model run much slower compare to its IBIS counterpart run in other commercial simulator under test load condition. In extracted channel simulation, the “slow down” becomes less apparent as there are multiple transmission line segments present in the topology. The time step limit introduced by the shortest transmission line is common to all simulators which may not be much longer than the TLines we have introduced.

Another note worth mentioning is that while this post focuses mainly about Ku/Kd and voltage waveform data, Composite current and their ISSO_PU/ISSO_PD are treated similarly: An ASRC constructed from composite current based on time aligned point with voltage counterpart is used to draw current. Another set of scaling table, based on ISSO data ares computed off line in advance in order to take the non-ideal voltage supply into account.

With both ramp and waveform based Ibis to spice flow being available, we are able to perform SI/PI simulation using IBIS on free spice simulators. Such flow has been integrated in our SPIBPro flow as shown below: 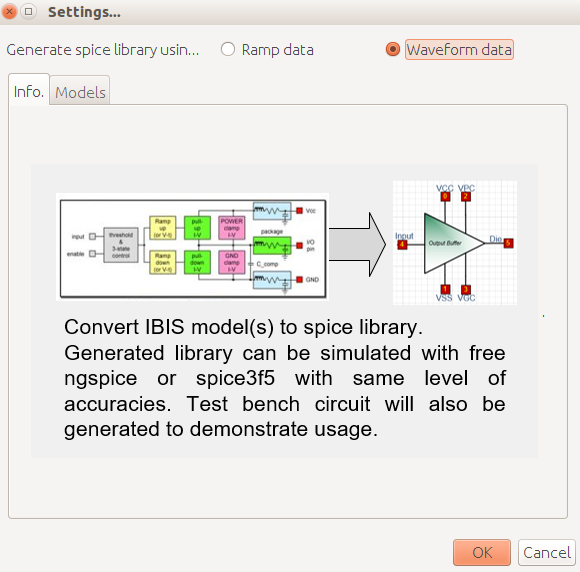 Ibis to Spice function is SPIBPro