In previous several posts, we talked about IBIS modeling of analog buffer front end.  In today’s post, we are going to give an overview of the modeling of the algorithmic portion which provide equalization to both TX and RX. These algorithmic blocks are usually modeled with IBIS AMI, the “Algorithmic Modeling Interface” portion of the IBIS spec.

The figure above represents the channel from end to end. The passive channel is composed of various passive elements, such as PCB traces modeled with transmission lines and vias, connectors modeled with s-parameters. The pink block is the analog buffer which acts as front end to interface to the channel directly. They are usually modeled in IBIS. In the TX portion before the front end, and RX portion after that, are equalization circuits. They can be modeled in IBIS AMI. So the AMI model actually works with IBIS to complete the both TX and RX path from latch to latch, instead of pad to pad. In an IBIS model which use AMI, one will find a statement like below, which points to the AMI’s parameter file in .ami extension, and the compiled portion in either .dll (dynamic link library on windows), or .so (shared object on linux), and the IDE with which these .dll/.so files are produced.

The main quantitative measure of signal integrity are eye height and eye width  of an eye plot. From eye plot, bit-error rate (BER) or other plot like bath tub curve can be derived. The eye plot is formed by folding many bits in time domain with waveform representing the response of these bit sequences. When doing end-to-end channel analysis with transistor  buffer or traditional IBIS model, one have to go through actual simulation to obtain such waveform. This is very time consuming and can only acquire very limited number of bits. In order to speed up the process, waveform synthesis is desired, thus brings the need of a new spec. and the invention of AMI. With this performance requirement for technical considerations included, the following lists why IBIS AMI is required:

What is in IBIS AMI:

Now that we know the scope and application of the AMI, let’s take a look at its components in more details. Depending on your perspective: 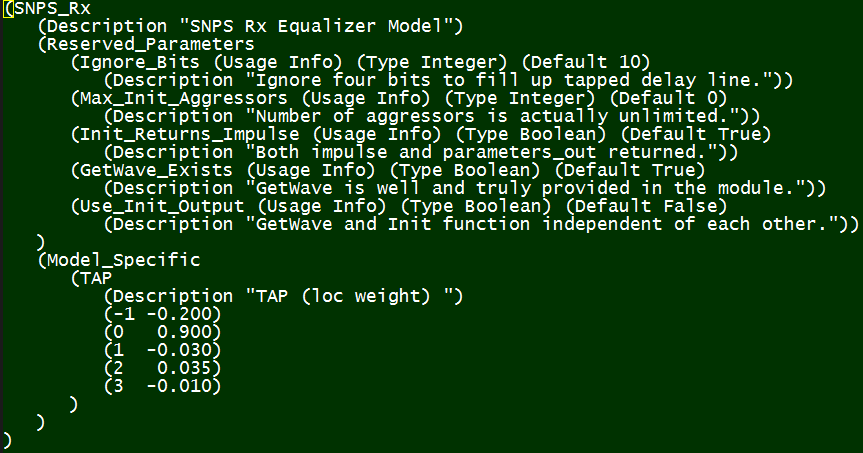 These are compiled portion of the model. Note that both .dll and .so files also depends on your OS is 32-bit or 64-bit. So to run such AMI models on an 64-bit machine, one must have 64-bit .dll or .so as well.

An AMI model developer can’t foresee how the developed models will be used. However, the model’s implementation itself will impose such limitation. There are two modes of AMI operations: Statistical or Empirical. If the “GetWave” function is not implemented, the model will only be able to run in “Statistical Flow”, meaning the passive channel must be LTI. On the other hand, if “GetWave” function is implemented, then the model may also run in “Empirical Flow”, which allows non-LTI channel. The figure below gives an overview of the two modes of AMI operations: 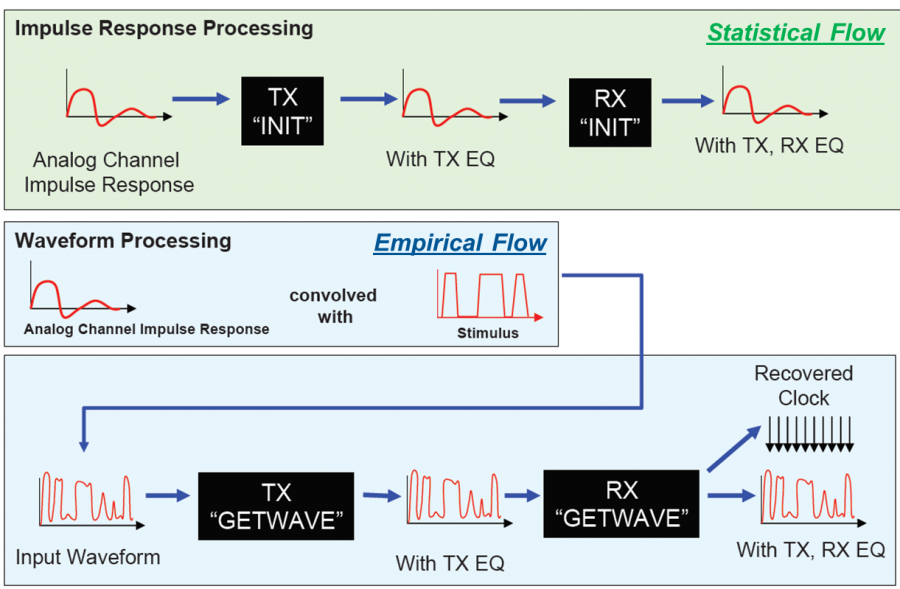 In reality, TX and RX AMI models may be from different vendors. Thus their combination also set the limits on how the models can be used. Interested user may see the section 10 of the IBIS spec. for detailed operation explanations.

This post gives a brief overview of IBIS AMI. The modeling flow of AMI model impose a challenge to the model developers. They usually need to know more inside details about the EQ design rather than doing black-box modeling approach. Besides, the extracted EQ  algorithms along with their parameters must be coded in C/C++ at least in order to compile and generate required .dll/.so files. Lastly, the flow is more or less EQ implementation dependent (depends on which high-level language the EQ was designed) and the model validation also requires deeper knowledge about the signal integrity. It’s common to have both EDA and SI expertise like what we have here at SPISim to work closely with IC vendors to deliver such models in good qualities. In the future posts, we may come back to cover all these steps and topics in more details.