In the past, we have blogged several articles regarding buffer modeling. The flow and focus there are mainly for single-ended. The considerations are that:

During our workshops in Taiwan last month, several attendees asked about CML (current-mode logic) modeling. With the maturing of the concepts in SE modeling and the prevalence of SERDES interfaces such as USB, SATA, PCIe etc, we think it’s a good time to revisit the differential modeling flow in more details. We will also show how this design concepts are realized in our SPIBPro in next post.

Note that the contents of this and next posts are also written in conjunction with the paper submission to the IBIS summit later this year.

[The info. here are summarized from the IBIS cookbook V4]

A differential buffer can be categorized into three different types:

For pseudo differential type buffer, the single ended buffer modeling flow can be applied directly. One only needs to generate these two “uncoupled” buffer separately (or use the same model with input flipped) and describe their differential behavior using the “diff pin” IBIS keyword:

Note that this “Diff Pin” keyword is also optional. So one may also simply instantiates two instance of the single ended buffer and use them together outside the IBIS file, such as in the spice netlist.

For a true/half differential buffers, the existence of “coupling” between P and N circuits must be described using existing IBIS syntax. There are two ways to do so: either using “series” or “external model” keywords:

Pure method 2 implementation, i.e. coding in language like Verilog/VHDL, is up to the model developer. On the other hand, the syntax and structure of series elements, used in method 1, is strictly limited. Thus the modeling process below focuses on method 1 above, i.e. the series model method.

As the coupled half/true buffer described by separated single drivers and connected via a series model for the coupling, the modeling flow must somehow be able to extract the data for these blocks independently so that they can be described with conformed IBIS keyword and reproduce the response when putting together.

For the “Driver” block, it’s a generic input/output/IO type buffer. So tables such as pull-up/pull-down/power-clamp/ground-clamp, when applicable, must be extracted. So are the transient waveform under different test loads. The extraction must be done such that the coupling with other half can be separately as an independent “series element” model. 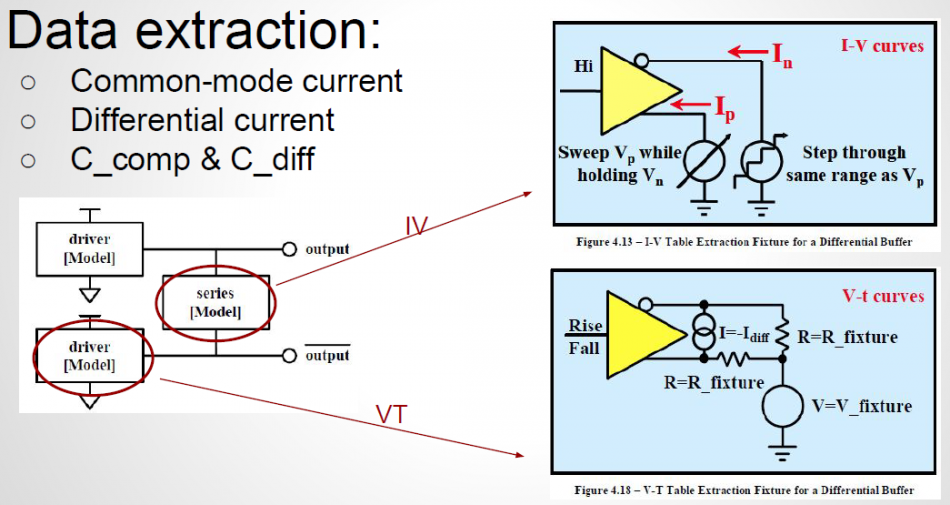 Interested user may find some study presented in IBIS summit, such as [this one]

As one can see, the modeling process for a differential buffer is not linear and a certain order must be followed. Inaccurate common-mode extraction will affect IV tables and cause dc-mismatch of the steady state. In addition, failure to extract C_Diff and model different current accurately will greatly impact the accuracy of the transient data. We will see how a modeling flow should take these into account and be validated easily. These are also design concepts behind our SPIBPro flow.